(Written mostly because that mag I work for needed a Last Word column. Perhaps you'd like to contribute one for next week?)

I was never a runner.

In eighth grade I tried track and field and wound up doing discus and shot put, partly at the urging of my gym teacher ("You've got the body for shot put, Kelly") and partly because those events required the least amount of running during practice. Once during the season, I had to run a mile. I think it took me half an hour.

So perhaps it's understandable that I began my adulthood with a hatred of running over all other forms of exercise. "Running - ugh!" I'd say. "Give me swimming, step aerobics, the elliptical - anything but running!"

And then one day nearly four years ago, my dad called me up and asked me to go for a run. His plan: We'd run a minute, then walk a minute. Repeat 10 times twice a week; watch the pounds drop off. "You can run for a minute, right?" he said.

My dad's side of the family is plagued by heart disease, high blood pressure, high cholesterol - pretty much any health problem you can have that's linked to poor fitness. "Sure," I said. "I guess I can run for a minute."

That first gray, chilly day, though, I nearly couldn't. Not by about the eighth time my dad's watch beeped, signaling that it was time to run again. By the end of our 20-minute workout, I was nearly sick.

But we kept it up, and eventually running a minute was easy. So we tried running a minute and a half, then two minutes, then three - and then, a year after that first miserable day, we ran our first 5K.

At this point, I still didn't really like running - but, I learned, I liked 5Ks. Each one felt like I was beginning the day with a major achievement; plus, I liked getting a T-shirt and a bag full of coupons and samples.

For a year and a half, we continued running, adding 5Ks in here and there. And then, around Christmas 2007 a friend asked me if I wanted to run the Flying Pig Half Marathon, and I was kind of terrified of failure. But I said yes, and I began to train.

And somewhere along the way, I discovered I liked running. I liked taking time (up to two hours, by the end of training) for myself to do something good for my body. I liked getting out of my car and pounding the pavement in my neighborhood. I liked being out on the trail with just my iPod shuffle and my own thoughts. And I loved joining tens of thousands of other runners on that morning in May. (Here's my three-part recap.)

The half marathon was one of the best things I've ever done. I loved it so much that last week, I signed up to do it all over again. Maybe I'll even get my dad to join me this time.

I'm still not fast. I still huff and puff and marvel at fitter athletes who zip past me without so much as a wheeze.

But I am a runner. 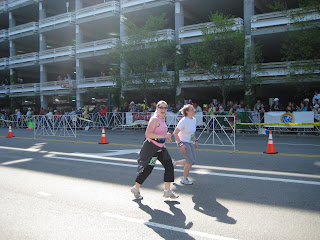 YAY! That's awesome! I'm going to try to do the full again, and am also feeling quite terrified.

Looking forward to your training stories! Maybe you will write a Pig Blog??

I'll totally recap some training stories here, but we've got so many applications for Pig bloggers at CiN that I probably won't be needed for that!

And you're flippin' awesome!

love that video. Keep on running.