Time for an adventure! 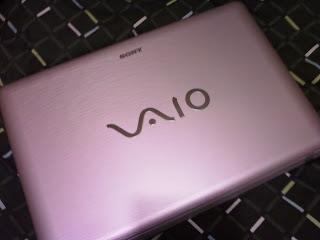 An adventure into an operating system I've avoided for 10 years, but am now trying because Mac = expensive (you might not have known that; it is kind of a secret). 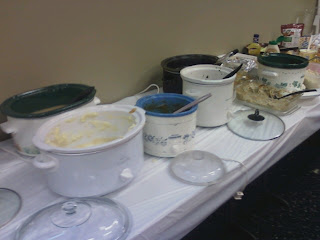 You really can never have too many Crock-Pots.
Posted by Unknown at 1:31 PM No comments:

Your result for The Nerd? Geek? or Dork? Test...

A Nerd is someone who is passionate about learning/being smart/academia.

A Geek is someone who is passionate about some particular area or subject, often an obscure or difficult one.

A Dork is someone who has difficulty with common social expectations/interactions.

You scored better than half in Nerd, earning you the title of: Pure Nerd.

The times, they are a-changing. It used to be that being exceptionally smart led to being unpopular, which would ultimately lead to picking up all of the traits and tendences associated with the "dork." No-longer. Being smart isn't as socially crippling as it once was, and even more so as you get older: eventually being a Pure Nerd will likely be replaced with the following label: Purely Successful.

Also, you might want to check out some of my other tests if you're interested in any of the following:

Take The Nerd? Geek? or Dork? Test at OkCupid

Last night I took my friend Sue to a fundraising gala for my employer's charitable foundation. I've never been to a gala before, so that was fun! There was a pasta bar! Free drinks!

And of course, there were several ways for those in attendance to give more money to the foundation. Like the silent auction, which had packages ranging from "Madagascar: Escape 2 Africa Beanie Babies" to "diamond necklace." I bid on (of course I bid on) a package called "Harry Potter and the Film Memorabilia," a Gryffindor scarf and Hogwarts messenger bag filled with unseen random stuff from other movies. (It was donated by a co-worker who used to work for film promotion company The Owens Group.) 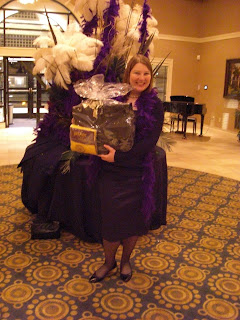 I'm kind of surprised I won with my paltry bid, because the bag on its own is pretty nice. 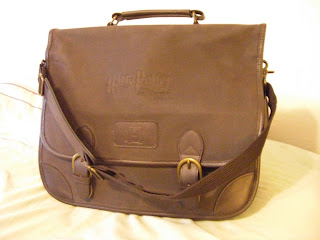 And hey, now I have a scarf to go with the Gryffindor hat Jeff bought me! 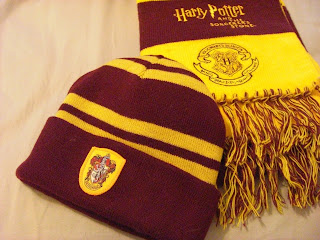 But what crazy movie tie-in promotional items are hiding inside? Let's find out!

(I love this kind of thing.) 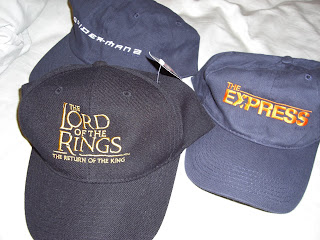 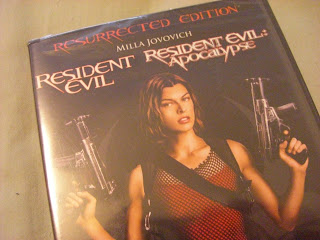 A DVD of Resident Evil: Apocalypse. I have mixed feelings on this one. On the one hand, free DVDs are great! On the other hand, zombies are very scary. 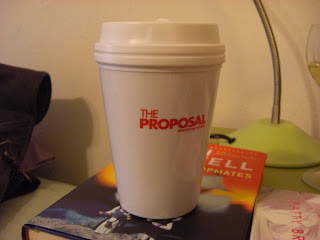 A travel coffee mug from The Proposal. (There was coffee in that movie for all of about 5 minutes, but I guess when you're looking for a tie-in promotional product for your movie, a speedboat or a horrible wedding dress doesn't work so well.) I will totally use this - if the lid doesn't leak. (The lid's going to leak; I can tell. The lid always leaks.) 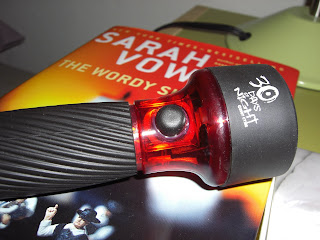 A flashlight for 30 Days of Night. Clever girl. 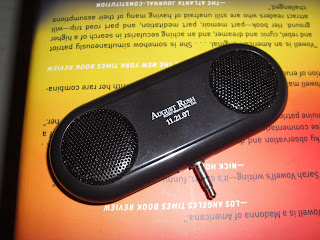 A tiny speaker set for your iPod, for August Rush. I hear that movie is terrible! But the speakers are kind of neat. 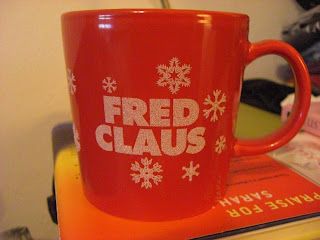 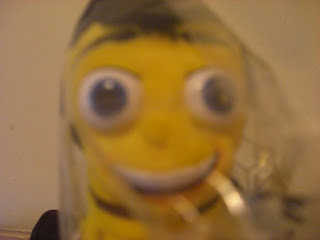 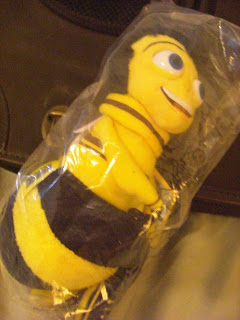 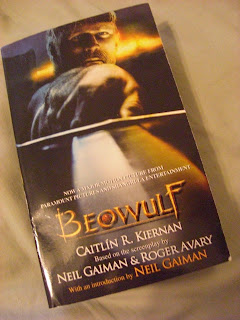 Hahahaha - the novelization of the movie Beowulf! This is a thing that exists! (It's written in the present tense, which is something you don't see that often in novels. Also: HAHAHAHAHA!) 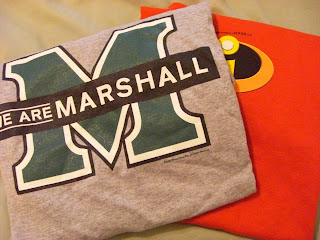 And finally, two T-shirts - one from We Are Marshall, and one from ... 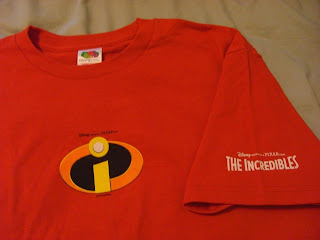 AWESOME! The Incredibles! My favorite Pixar movie is now my favorite casual T-shirt!

Well, that was a fun little grab bag! I'm very happy I was able to get it by donating a a bit of money to charity. Maybe (if you're lucky) I'll do some sort of blog contest to give away a few of the items. (Hmm, what sort of contest has a Fred Claus mug as its prize?)
Posted by Unknown at 10:21 AM No comments: 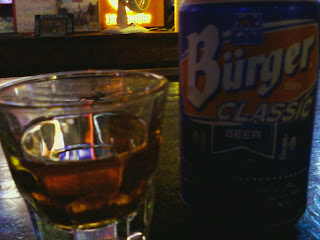 At Animations.
Posted by Unknown at 10:33 PM No comments: 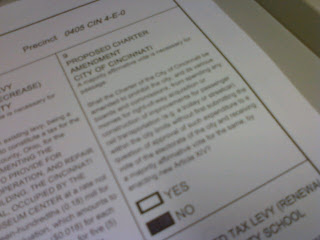 Posted by Unknown at 8:56 AM No comments:

So, we've got an election coming up. To celebrate the first-ever Election Day in which I've not been professionally discouraged from expressing political viewpoints, I had been planning on doing an official "Kelly to the Max!" endorsement list.

And then it occurred to me that I know basically nothing about the candidates. I'll look them up after I post this, and they'll all say they're in favor of ducklings and against tsunamis, and I'll vote for whichever identical-platitude-spouting candidate is a member of the political party with which I identify.

(Unless! Keep this in mind, future political candidates, because I know that my vote is very important to you. I will NOT vote for you if you do not have a website. If you've made no effort whatsoever in this arena, I assume that you'll make no effort whatsoever to govern effectively. We are living in the future, people; being able to buy a domain name and have it rerouted to your Wordpress blog ought to be an entry-level requirement for civic authority of any kind.)

Also, I will vote for the one candidate I've met socially. (I make important decisions this way. America!) And I will not be voting for the candidate who high-sticked C. Trent Rosencrans in between the legs during a broomball game.

So without further ado, I present: The Kelly to the Max! Issue-Only Endorsement List!

"It's time for someone to have the courage to stand up and say: 'I'm against those things that everybody hates!' " One of those things is not taking care of veterans when they come home from fighting.

This is a weird amendment - the Ohio Farm Association is for it, but the adorable dairy down the road is against it? (You can pick up their milk at Whole Foods, by the way.) The governor is for it, but the Humane Society is against it? So I was leaning toward no anyway (I like the governor all right, but I also like the Humane Society), but what convinced me is actually someone on Twitter asking, "Why exactly do we need a constitutional amendment for this thing?" Good point. I'm suspicious of any state constitutional amendment that feels like something that could be hammered out in the Legislature. (Unless it gives money to veterans, apparently.)

Ugh, this puts me in such odd company - it seems like the most vocal opponents of Issue 3 are the sort of fun-hating weirdos that banned dancing in Footloose. (I saw a "No on 3" commercial last night; it looked like a Jack Chick tract.)

I also think about my grandpa, a regular visitor to the Grand Victoria casino in Rising Sun, Indiana, and I wonder ... would this downtown casino have free parking? Because my grandpa sure isn't going to drive downtown and wander around looking for a parking space when the Grand Victoria has a huge parking lot and a shuttle that'll take him right to the door.

Yes to MR/DD services. Yes to one of the top museums in the country. Yes to the public library!

Issue 8 should be renamed "Issue 9, but with water."

And I'm gonna quote this one at great length, because it sums up my thoughts nicely:

Whatever you think of a streetcar system in Cincinnati, Issue #9 is a mind-boggingly bad piece of public policy. The small, craft brewers we all want to start brewing here (not to mention the ones we already have) need a strong social and economic base from which to draw customers. What major corporation really wants to be in a city that has to throw it out for a vote if the local zoo wants to extend its train to the new parking lot? Heck, what small business wants to put up with that?

Remember the phrase “That’s no way to run a railroad?” Issue #9 is definitely no way to run anything. Ballot measures are an awful way to make long-term public policy, unless you happen to think California (land of the 10,000 ballot initiatives) is a place you want to emulate. Elections are expensive. They take a long time to organize. Once underway, facts have little to do with the outcome.

Amen to that! I know I hate elections! Wait, why am I even writing this?

And that's all she wrote, folks! When you go to the polls tomorrow, vote the same way I do on everything, or else we won't be friends anymore!
Posted by Unknown at 9:09 PM 4 comments: 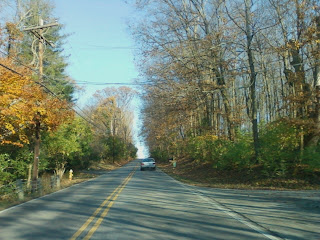